Saul McLeod’s piece on Visual Perception Theory presents a debate in psychology about the way we perceive and interpret visual stimuli. How much of our understanding of what we see is based on what we are actually looking at and its intrinsic properties, versus our own perceptions based on our knowledge and experiences?

Two competing theories exist. One awards the power of meaning making to the object itself, while the other places the interpretation of the meaning within the individual who is doing the looking.

Bottom-Up Processing
Our assessment of what we see is data-driven, based on the elements contained within the stimulus itself

Top-Down Processing
We use contextual information to make hypotheses about what we see, and constantly test them against our understanding

The truth likely lies somewhere in between. Our eyes take in the details of what we are presented with, and our brain processes those details based on what we know. When we look at something we are not just seeing the thing in isolation. We are seeing every part of the whole and the way those parts are interacting. We are seeing the thing and subconsciously connecting it with every other thing we have ever seen, with our past knowledge and experience, As Saul McLeod states, “We actively construct our perception of reality.” 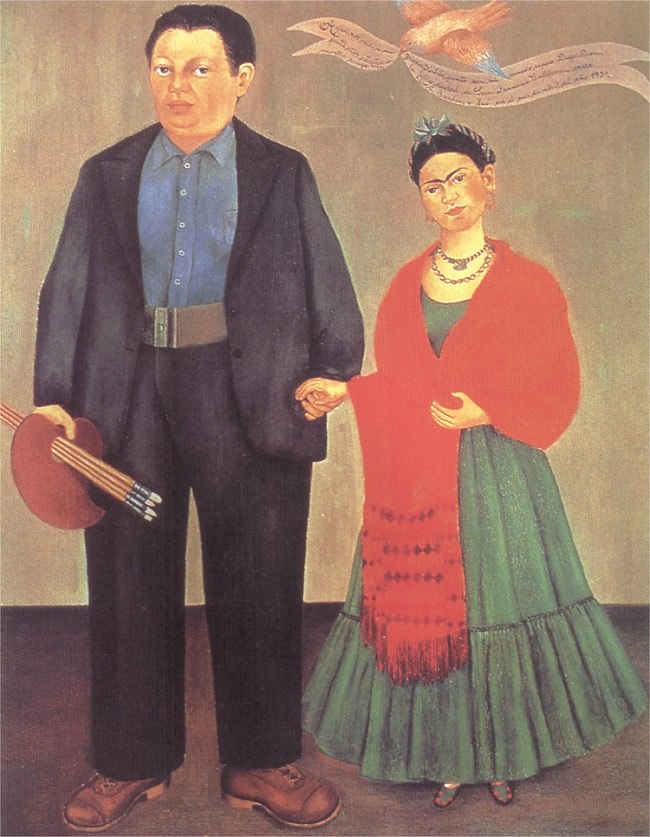 This self-portrait is considered to be a wedding painting of Frida Kahlo and Diego Rivera. When it was painted, Frida adored her husband and wanted to capture that moment of time in their life. You can sense their devotion from their proximity to one another, and their affection in the way they are holding hands. The signals embedded in the image itself convey comfort and happiness. The colors are warm and inviting, and their expressions are ones of seriousness to their devotion.

The interpretation of the painting changes, however, once my own knowledge intersects with what I see. It is impossible to view this painting outside of the context I have of their relationship. Their relationship was rocky at best – Diego was very unkind to Frida, and engaged in extramarital affairs. We can guess at the power dynamic between the couple by looking at the differences in size – Rivera is massively portrayed next to Frida’s smaller frame. Even her hands appear small. He is holding a palette and brushes, an initial attraction for Frida. However, in the end his dedication to his work came far before his dedication to his wife, eventually leading the couple to divorce. While Frida may have intended this painting to capture a proud moment kicking off their life together, the lasting impact on the viewer with a general knowledge of art history, is one of foreboding. 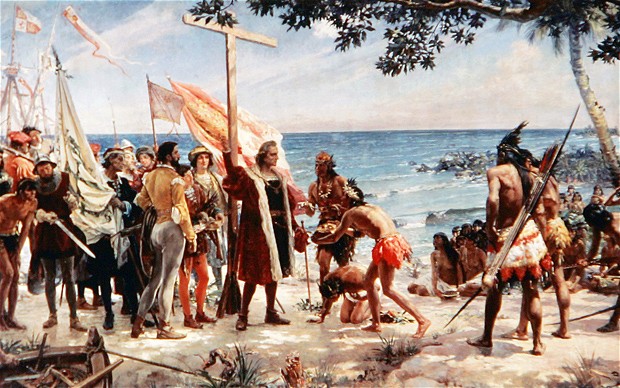 The Disembarkation of Christopher Colombus on the Island of Guanahani

This painting is meant to be one of pride and celebration, capturing a moment when Christopher Columbus makes landfall and is greeted by natives, welcoming him with gifts. At its face value, looking just at the information we are being presented in this image, we feel joy. Two groups of people, apparently different in dress and culture, are meeting peacefully on a beach. While some weapons are present in the scene, none are being used aggressively against the other people. White flags fly in the air, devoid of any emotional aggression. Off to the far left a solider is showing one of the native men a sword, entertaining his curiosity. Off to the right women appear to be calmly waiting and watching. At the very center, an offering is being made to the explorer. The warm colors present an image of calm and welcoming, even the ocean is rolling in as a gentle tide.

However when I look at this image, peace is not what I feel. Instead I feel fear, anger, shame, disgust and frustration. My own knowledge of what happens in the weeks, months and years after the moment this painting attempts to capture cloud my perception of what is happening in the picture. I fear for the women sitting on the beach, naked in their vulnerability. Instead of evoking peacefulness, I think of the terror they may shortly experience at the hands of the explorers. While the painting portrays kindness and respect between different cultures, my own life experience has taught me about the strain that more often exists. From the vantage point of the present day, it’s hard to see this image as anything but tragic, marred by the knowledge of the genocide that would follow all the way up to our current and continued marginalization of native populations.

While various theories within psychology seek to argue whether our brains engage in top-down or bottom-up processing of visual stimuli, the only thing that’s clear is that the answer remains unclear. Based on the analysis of the images above, contrasting the intention of the artists, the physical details of the images, and the interpretation of meaning within context, it’s apparent that all of these factors are involved in making meaning of what we see. Even the most skilled artist cannot capture their pure intentions within a visual image, nor can the clearest expression eliminate the contextual factors that we each bring to our perception. Beauty, it seems, is in the thing itself and also the eye of the beholder.

2 comments on “How We Create Meaning From What We See”